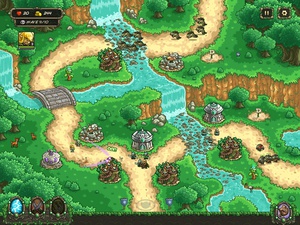 4,17 (votes: 8087)
Log in with facebook
--- (your vote) Publisher: Year: 2016 #19 in Arcade , #25 in Strategy , #33 in For boys To favorites To favorites In favorites In favorites
Log in with facebook
Tower defense
Report broken game
Report broken game
About
Kingdom Rush follows the formula of a typical tower-defence game. Placing towers on the side of a path to destroy enemies that appear in predetermined waves, the objective is to defeat all the waves before they reach the end of the path, using the towers and certain abilities. Letting too many enemies through, results in a Game Over.

Kingdom Rush expands on the usual set up by using a limited number of tower types, whilst introducing individual units that engage enemies on the path and including bosses. As levels progress new towers and further upgrades are unlocked. Heroes are used as unique units that can be directed around the level. Heroes have special moves that increase in strength as they gain experience through a level, and will regenerate if defeated.
more hide
Category
For boys , Arcade , Strategy
Notification