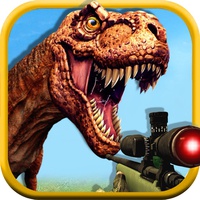 It's Jurassic Era! The wild Dinosaur wants to return in the wild forest! These are the monster legend from the prehistoric time. This frightful hunting adventure for you to hunt the Dinosaur...Be careful, because not only you are hunting in the forest, but also you are being hunted.

It's a time to prepare yourself to hunt and shoot the dangerous Dinosaur in the Jurassic land! Forest is full of dangerous predators! Hunt the Dino to stay alive. Hunt and prey the most dangerous animal. Battle for your life against frightful T-Rex, Tyrannosauru and Spinosaurus. Zoom in and shoot your target before they attack on you.

HUNT AND SHOOT DINOSAURS
Journey to a hidden Dinosaur,hunt the most ferocious Dino in history. Experience the Real 3D Jurassic Era.

EXPLORE A HUNTING WORLD
Immerse yourself in diverse environments and explore the visually stunning adventure!!! Watch out for attacking Dino predators.

Leave a review and rating to let us know what you think about this game. We would really appreciate your rating…