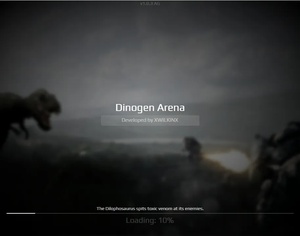 4.30 (votes: 1143)
Log in with facebook
--- (your vote) Publisher: Released: 01.01.1900 #5 in Action , #36 in Shooters To favorites To favorites In favorites In favorites
Log in with facebook
Report broken game
0%
About
Description
An intense top-down shooter featuring several game modes such as Deathmatch, Capture the Flag, Raptor Hunt, and more! Shot humans and dinosaurs, get better at the rankings, and master a bunch of weapons. There are a few different modes to play, so enjoy the carnage. Based off my original game Dinogen.

TUTORIAL
Learn the basics of Dinogen Arena by completing the tutorial. Strongly recommended for new players!

RANKED MODE
Progress through the ranks in Ranked mode to unlock new weapons, equipment, and perks. Ally with the humans or play as a dinosaur by joining the dinosaur team! Earn XP to level up by killing enemies, finishing objectives, and completing objectives.

SURVIVAL MODE
Enjoy endless carnage? Try the Survival mode! Survive as long as you can against the endless waves of increasingly difficult dinosaurs. Fortify your position with auto turrets, additional reinforcements, and air support!

NOTE
All controls can be changed in the settings menu.
more hide
Category
Shooters , Action
Notification