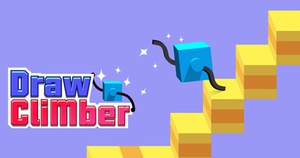 4.40 (votes: 2876)
Log in with facebook
--- (your vote) Publisher: Released: 01.01.1900 #14 in Arcade To favorites To favorites In favorites In favorites
Log in with facebook
Report broken game
0%
About
Draw Climber is an ingenious little puzzler that takes advantage of modern technology. In it, players must create limbs through which their avatar can clamber from one end of a given level to another. Earn points by completing the level as fast as possible, and by collecting coins and power-ups along the way. Draw something long, and your character will move much faster – but they won’t be able to move through narrow passageways, and they won’t be able to collect those coins that are low to the ground.

Use the mouse (or your finger) to draw a new limb in the box beneath your character.
more hide
Category
Arcade
Notification