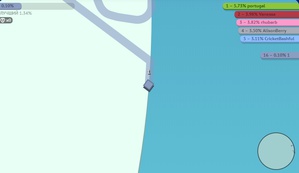 4.50 (votes: 1285)
Log in with facebook
--- (your vote) Publisher: Released: 01.01.1900 #12 in Other To favorites To favorites In favorites In favorites
Log in with facebook
Report broken game
0%
About
Paper io 2 takes the winning formula laid down by the first game, and makes some great improvements. The aim of the game is to cover as much of the playing surface as possible. Expand your territory by making loops. Players are safe when they’re in a zone of their own color, but vulnerable when they’re outside that zone. All it takes is for another player to hit the trail you’re leaving behind, and bam, you’re dead! To expand requires bravery – but you also need to make the right moves.