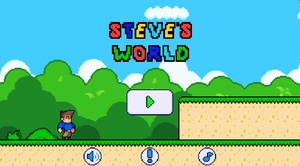 4.20 (votes: 568)
Log in with facebook
--- (your vote) Publisher: Year: 2020 #393 in Arcade To favorites To favorites In favorites In favorites
Log in with facebook
Report broken game
0%
About
Super Steve World is a bit like a certain classic platformer we could mention, except players take the role of a guy called Steve! The mechanics should be familiar to anyone who’s played a Mario game. Pick up coins, health and power-ups to dispatch your enemies. Jump on their heads to kill them! There’s only a certain time available to complete each level, so don’t hesitate. Collecting coins gets you extra lives, and discovering secret areas nets you plenty of extra coins!
Use the arrow keys to move around
Press Z and X to jump and fire respectively
more hide
Category
Arcade
Notification